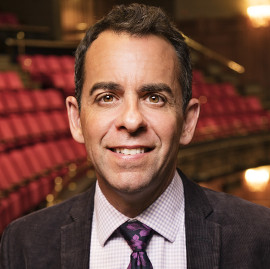 Dennis Garnhum was hired as the Artistic Director of the Grand Theatre in 2016; a move that was a coming home for Dennis. Growing up in London, his theatre career began at the Grand with a role in Antler River at age 13.

Dennis’ inaugural playbill with the Grand in the 2017-18 Season, featured the world premiere of Silence: Mabel and Alexander Graham Bell by Trina Davies, the North American premiere of Chariots of Fire, and a new adaptation of A Christmas Carol--Dennis’ directorial debut at the Grand. The following season, Dennis directed Prom Queen: The Musical, Timothy Findley’s The Wars, and a record-setting run of the immersive Cabaret, that was extended three times on the McManus Stage and was set for a cross-Canadian tour in the 2020/21 Season before the pandemic shuttered theatres.

For the 2019/20 season, Dennis directed workshops of a new Canadian musical Grow at two of North America's prestigious musical theater incubators: Sheridan College's Canadian Music Theatre Program and the Goodspeed Festival of New Music in East Haddam, CT. Originally scheduled for its World Premiere on the Spriet Stage in May 2019, the production was postponed due to the pandemic but is destined to premiere at the Grand Theatre in March/April 2022.

Dennis is a recipient of a Queen Elizabeth II Diamond Jubilee and a Calgary Award for Community Achievement in Arts. 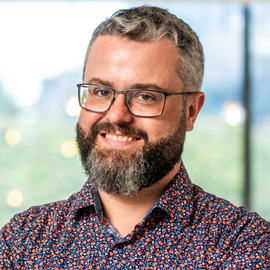 Originally from Winnipeg, Klassen has held a variety of leadership roles in the arts and culture sector, including most recently as the Managing Director at Western Canada Theatre. Prior to this, he was the Director of Artistic Operations and Production at the Winnipeg Symphony Orchestra. A steadfast advocate for the arts and volunteerism, he also holds senior roles on numerous boards and foundations, including: British Columbia Arts Council (Council Director), Professional Association of Canadian Theatres (Treasurer), Kamloops Centre for the Arts Society (Board Director), and the BC Interior Community Foundation (Board Director).

“Within theatre communities across the country, the Grand is highly respected for its quality work, excellent facility, and outstanding artistic and administrative leadership,” remarks Klassen. “I am thrilled to be joining the Theatre at this pivotal time in its history, and look forward to building upon the strengths, successes, and the strong foundation laid down by the Grand’s current executive and artistic directors.”